The happiest of publication days to Mark Cavendish whose book Tour de Force is out now! 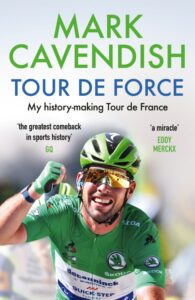 Available to purchase online and at all good bookstores.