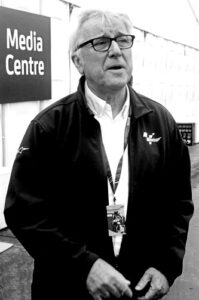 Nick Harris has been a respected journalist, broadcaster and author for 45 years. He is probably best known as a radio and television commentator and presenter. For 18 years he hosted and commentated on the MotoGP World Championship. When he announced his retirement over 1.2 million viewers tuned into his farewell Facebook video. He has also worked for the BBC, Channel 9 in Australia and TalkSPORT radio in both two and four wheeled World Championship sport.

In June 2019 Penguin Random House UK through Virgin books published Never Say Never which was Nick’s very personal 70-year history of the World Motorcycle Championship. A paperback was published in 2020 and Nick narrated the audio version. Three years ago, Nick compiled and edited The Racing Together book for the sport’s governing body. Fifteen years ago, Nick’s Barry Sheene biography written in conjunction with Steve Parrish and published by Little Brown sold over 85,000 copies and featured in the Sunday Times best sellers list. His ultimate history of the TT races was published in 1990 and he also wrote the autobiography of double World Champion Freddie Spencer.

Nick lives in Oxford and is a lifelong fan of Oxford United as a commentator, journalist and director.