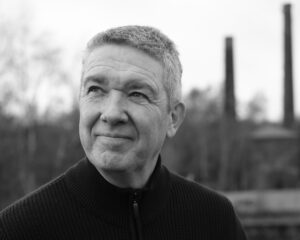 David Brayley is an author from Swansea, specialising in sport. He was educated at Brynhyfryd & Crwys Primary Schools, Bishopston & Gowerton Comprehensives and the University of Wales in Newport.

His debut children’s novel, Champion of Champions was published by Leeds based Scratching Shed Publishing in October 2017, and is an inspirational cycling-based tale aimed at Middle Grade readers.

In 2020, Brayley co-authored Chasing a Rugby Dream: Kick-Off, the first in a series of MG rugby books, with Wales and British and Irish Lions star, James Hook.

Brayley is a former school Governor who is passionate about promoting Reading for Pleasure for young people and makes countless school visits across Wales and the wider UK. He has spearheaded the Welsh Government’s ‘Make Time to Read Campaign with Ashley Williams in 2013, worked as a consultant for the National Literacy Trust on their ‘Premier League Reading Stars’ programme, and delivered sports literacy projects for Literature Wales in conjunction with Glamorgan CCC. He has also worked closely with Swansea City FC and Ospreys Rugby and their education programmes.

He is married to Debra and has two daughters, Georgia and Olivia.