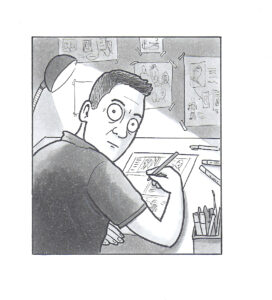 David Squires is a Sydney-based cartoonist whose work can be seen each week in the pages of The Guardian in both the UK and Australia. He also provides regular illustrations for L’Equipe in France and 11Freunde in Germany and his work has been exhibited at The National Football Museum in Manchester and The National Sports Museum in Melbourne. David is also the cartoonist for the film and culture publication Little White Lies.

David is the author of three well-received books: The Illustrated History of Football (2016) and Hall of Fame (2017), which were translated into several languages; and the 2018 collection of his Guardian cartoons, Goalless Draws. His satirical observations provide an insight into the world of modern football and have attracted a large following around the world.