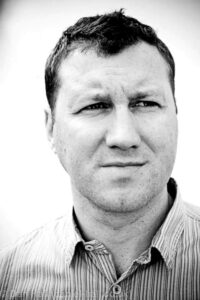 Richard Moore is a freelance journalist and author. His most recently published book, The Bolt Supremacy, was published by Yellow Jersey in July 2015 and was longlisted for the William Hill Sports Book of the Year Award 2015. Richard has also written a number of cycling titles, including Étape, which tells the story of the defining stages in the Tour de France seen through the eyes of some of the most legendary cyclists of our time. It was very well received, and was shortlisted for the Cycling Book of the Year at the Cross British Sports Book Awards 2015. His first book was In Search of Robert Millar which won the Best Biography category at the 2008 British Sports Book Awards. His second book, Heroes, Villains & Velodromes (HarperSport), was long-listed for the 2008 William Hill Sports Book of the Year. He is also the author of acclaimed Slaying the Badger: LeMond, Hinault and the Greatest Ever Tour de France (Yellow Jersey, May 2011) which was made into a film by John Dower, whilst The Dirtiest Race in History: Ben Johnson, Carl Lewis and the 1988 Olympic 100m Final, published by Wisden Sports Writing, is also in pre-production.  Richard is also a former racing cyclist who represented Scotland at the 1998 Commonwealth Games and Great Britain at the 1998 Tour de Langkawi. He is also one third of The Cycling Podcast. Their debut title, A Journey Through the Cycling Year, was published by Yellow Jersey in Spring 2018. A second book, The Grand Tour Diaries, was published in 2019.