We are thrilled to announce that Tom Palmer has been nominated for the 2022 Carnegie Medal for his book Arctic Star. Congratulation Tom! 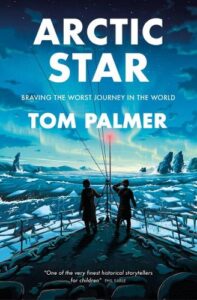 Winter 1943. Teenagers Frank, Joseph and Stephen are Royal Navy recruits on their first mission at sea during the Second World War. Their ship is part of an Arctic Convoy sailing to Russia to deliver supplies to the Soviets. The convoys have to navigate treacherous waters, sailing through a narrow channel between the Arctic ice pack and German bases on the Norwegian coast. Faced with terrifying enemy attacks from both air and sea, as well as life-threatening cold and storms, will all three boys make it home again?