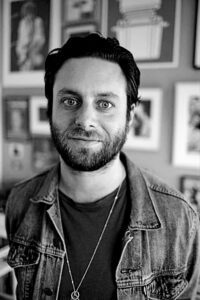 Felix White is primarily known as the guitarist and one of the principal songwriters in UK band The Maccabees. Upon the band’s split in 2017, which culminated in a number 1 album, festival headline shows, multiple awards and a finale run of three consecutive shows at London’s Alexandra Palace, Felix has embarked on a number of other projects. These include co-founding independent record label ‘Yala! Records, writing film scores, broadcasting for BBC 6 music and co-presenting the BBC regular loosely cricket based podcast ‘Tailenders’ with Greg James and Jimmy Anderson. Last year he collaborated further with Jimmy Anderson, ghost-writing Anderson’s Bowl. Sleep. Repeat and wrote regular features on the game for the Independent and Wisden Cricket Monthly. His first book Its Always Summer Somewhere, a memoir through the lens of a love of cricket and music, taking in grief, identity and belonging was published by Octopus in August 2021.